Katinka Lampe paints portraits. Or at least, you can clearly recognise the representation of a person. Yet, this is not the main motive of the painting. The portrait merely serves as reason to make the painting. The portrait is the imagery concept. Her paintings greatly appeal to the beholders. Conscientiously and with a great sense for beauty she portrays her models, who are generally quite young. The resulting portrait is not an exact copy of reality, but instead a visual impression of it. By including things like a wig or a balaclava or putting a lot of make-up on the model's mouth she adds an unusual or artificial character to her portraits. Lampe's work is both vulnerable and distant at the same time.

Lampe wants to avoid all that is personal in her art. Therefore she tries to ‘paint herself out of her paintings' as much as possible. Lampe gives her works neither titles nor names. She would much rather have the beholder associate freely. Lampe is constantly searching for the right proportion between content and paint, realism and abstraction. The combination of various painting techniques is typical of her paintings. Big colour areas and minutely painted details, sharp contrasts and soft outlines alternate in her work. Lampe wants to create an ‘image that is stout yet moving'.

Although her portraits are actually quite realistic, Lampe does not consider resemblance important in her portraits. Individual characteristics of models are deliberately pushed into the background. Nevertheless, the appeal of the paintings remains great. The glance of those portrayed plays a determining role. Whether it is self-confident and cutting or shy and dreamy. Sometimes the eyes are hidden away behind big sunglasses or the beholder stares at the back of the person portrayed. Lampe thus manages to create tension in her work. She adds false lashes, big jewellery  and headscarves; objects with social and cultural connotations that somehow clash with the youthful innocence of her models. Therefore her paintings both attract and push off at the same time. It is this quality which attributes to her works an extra layer of meaning. 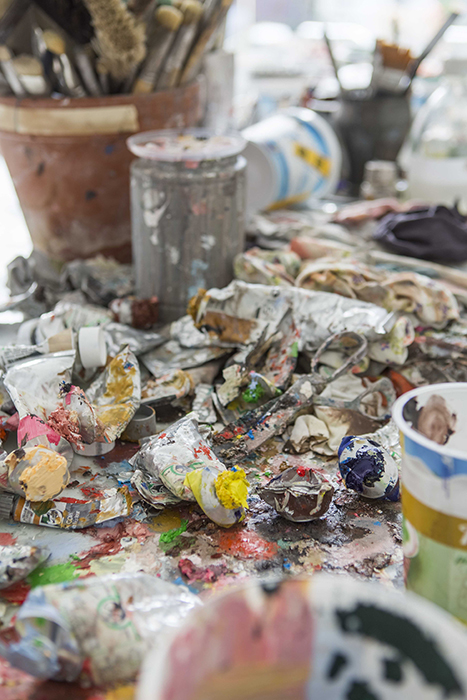