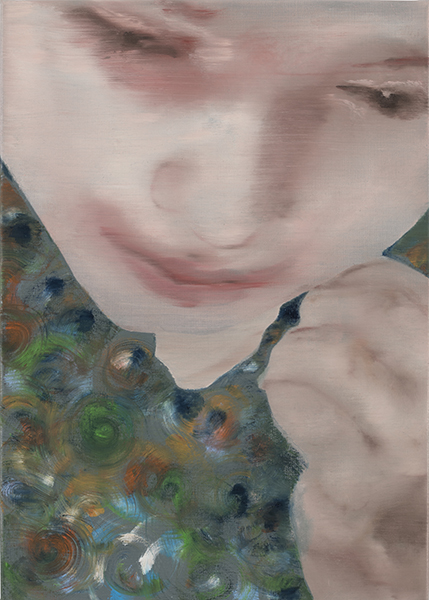 For Anima Mundi, Lampe presents a new series of paintings in which her subjects are tightly cropped or placed in arresting poses, often revealing just a detailed part of their body. This unorthodox perspective and framing acts as a device that shifts our focus away from the identity of the subject towards formal aspects of painting. By inviting the viewer to see beyond what is represented, Lampe’s uncanny depictions of people become vehicles to explore the masks we wear to fit in, and the challenges of looking past the surface both in paintings and in human relationships. Anima Mundi, as the title suggests, is Lampe’s attempt to represent what transcends physical appearances.

Inspired by the chiaroscuro and candle lit depictions of European Baroque artists such as Georges de La Tour and Jan ter Borch, Lampe uses light and shadow to create stylised and staged depictions of her subjects. The artificiality of each scene is increased by the introduction of clothing and accessories chosen by the artist herself, moving further away from the portrait as representation, towards the artist's own visual impression of the model. Rings, necklaces and patterned garments adorn the portraits in the exhibition. These items, often repositories of personal histories and one’s own individuality, when mediated by the artist become catalysts to explore issues around the process of identity formation.

In her practice, Lampe uses a wide array of painting methods, from classical underpainting to layered stencils which, cut from her drawings, are used to confer an uncanny flatness to her subjects. Lampe finishes her paintings with large brushstrokes that remove her hand from the work and allow the viewer a greater freedom in the interpretation of her subjects. Through this process Lampe creates portraits that appear suspended in time, as they at once traverse the realms of figuration and abstraction to question the fragility of human emotions and connections.